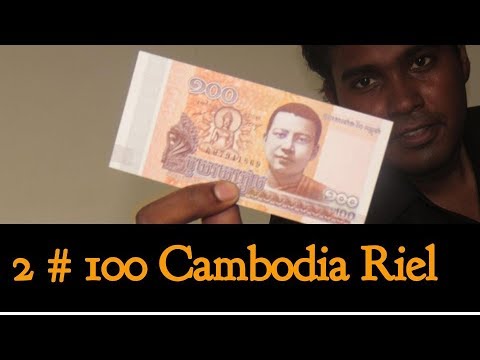 Combodia is small southeast asian nation situated near the gulf of thailand , shares its border with south asian countries like Thailand ,vietnam and laos.in ancient time combodia was known as kampuchea.. Combodia is a buddist kingdom as majority of the people follow buddhism with elective constitutional monarchy.this country is known all over the world for its old buddhist temples.The chapital of this kingdom is Phnom Penh.

The Combodian Riel is the official currency of Combodia. Issued and controlled by The national Bank of Combodia. This orange color currency with the denominiation 100 combodian reil was issued in the jan 2015. And with the release it went into controversies, it is said that some of the buddist monks were upset with the image of buddha being placed in the lowest denominated currency. As these currencies would be kept in the back pockets of the trousers and even in the bras of the ladies.

On the obverse it shows small buddha idol and on the left there is a portrait of a hindu mythical character the serpent, the snake or naga
Along with that is the image of their former king Norodom sihanouk who died in the year 2012

Lets see the obverse of the currency in the UV light

On the reverse feature the image of the silver pagoda , the royal palace in phnom penh which serves as the royal residence of the king of Cambodia and also a buddha statue in side